The Biofeedback's Influence In An Electronic Game

A game that utilizes biofeedback, to adjust the challenges proposed for the player

First of all, what you are about to read here, is just a small sample of the whole project. If you want to know more (and know how to read in portuguese), you can read the complete article here.

You can define "biofeedback" as a technic which is used to learn how to control body functions, for example, the heart rate. This helps to focus on subtle body changes, like, relax certain muscles to get a desirable result, to reduce pain. Essentially, biofeedback gives you the power to use your thoughts, to control your own body, in a way that helps your health condition or improve physical performance. Biofeedback is used a lot as a relaxation technic, and this is the my project's base development foundation. The player uses the control of his own body to try to manipulate the events inside the game.

This is a way for the game to understand something besides the player's aware decisions, like the press of a button or moving the analog stick. And now, the game gains the capacity to interact directly with the player's subconscious reply. Games can also use it to try and reach the Flow, that according to Mihaly [1990], it's a state when both player and game "get in syntony". In other words, the game is providing to the player a challenge which isn't hard enough to the point that causes frustration, nor easy enough to make him bored. 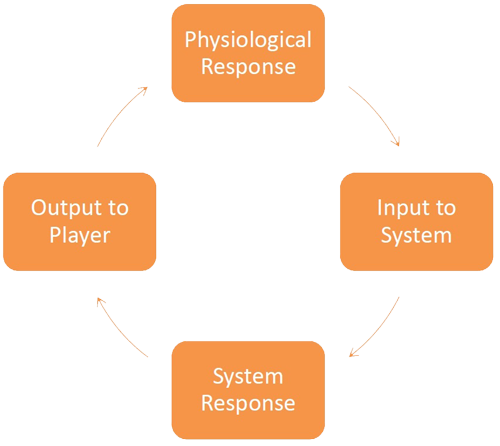 There is also another concept that I think is important to mention, and this concept is the Affective Feedback. But what does this mean? Well, it basically means that both player and game are affected by the actions made by each other. For that to occur you also need to keep a affective feedback loop, which means, that the game rule will try to induce the player to act in a opposite manner than he usually would. For example, in a situation where he, the player, would normally be relaxed, he would have to be agitated, and vice versa, creating that way, a loop. But you have to be careful, because depending on how the game is designed, what should originally contained a affective feedback loop, can become only a biofeedback game. Let's say you're making a racing game, where the more relaxed the player is, the faster he goes. It's counter intuitive to remain calm when you're losing (or even in the first place). But once the player knows how mechanic works, what once was a physiologically natural response, becomes a controlled information. And now the concept of affective feedback is lost. It's very important to keep that in mind when designing a game with affective gameplay in mind.

_The part about game design

So, what is this game all about...

It's about a chicken (a space chicken, to be more precise). Our hero's (the chicken) planet have been infected with a symbiotic parasite (very creative, I know), that spread it to every thing in the planet, living or not, and that it's all one big organism. Except you, the chicken, and now you have to escape, but in order to escape you have to make your way out through vicious monsters and deadly traps.

This is as a 2D platform game, you move in four direction (up, down, left and right). The games pace and difficult are partly controlled by the player's physiological sensations, in this case they are: blood pulse rate and galvanic skin response. These two are responsible for influence the level's hazards. The player's movement are controlled by a controller (horizontal movement) and by his breathing (vertical movement by blowing at a microphone). The player also have a lantern, that have it radius size influenced by a combination of his BPM and his breathing.

The game becomes harder as the player advances in-game. The design was thought to keep the player in a constant change of state, this means that he will face situations which if he stays in a relaxed state will be better and sometimes not. Why, simple because the more relaxed he is, slower the enemies will be, but in counter measure, his lantern will be weaker, which means that he will have a hard time exploring and avoiding death. Although there might be times where sacrificing view distance might turn out to be a better option.